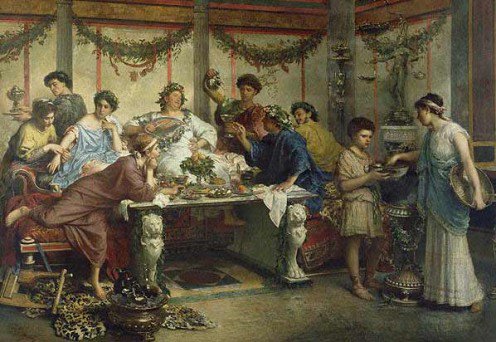 Holidays are an important part of Hellenic religious life across all of the Mediterranean– whether Greek or Roman. For the sake of modernity, relevant Graeco-Roman holidays will be adapted to the contemporary Gregorian Calendar.

Parentalia, Roman era, Gregorian calendar, February 13 – February 21: Literally “Ancestors Days” or “Days of the Ancestors”, Parentalia is the February festival celebrating the deceased ancestors of the family and the pater familias.  They are offered flowers, wine-soaked bread, violets salt, and wheat.  Often they are providing a true sacrificial banquet, but these are di inferni, spirits of the underworld.  They are those who dwell below, and proper care must be made in sacrificing to them.

Quinquatrus, Roman era, Gregorian Calendar, March 19: When the Temple of Athene on the Aventine Hill was consecrated. Feast day to Athene.

Kalends (May), Roman era, Gregorian calendar, May 1: First day of the month.

Lemuria, Roman era, Gregorian calendar, May 9, 11 and 13: A trio of solemn days for the malevolent and restless dead, for maintaining their memory is as paramount as those of the benevolent ancestors.  Sacrifices are offered as propitiation in order to keep the peace and avoid ill luck from these infernal spirits.

Thargelia, Greek era, Gregorian calendar, May 22 – May 23: Celebration in honour of Artemis and Apollo.

Flight of Aineías, June 11: According to calculations by Eratosthenes, today is the day the city of Troy was sacked in 1184 BCE. The burning of Troy would be the end of the Trojan War, but simultaneously it would be the birth of a new beginning. Ultimately, Troy’s fall would give rise to the eternal city of Rome centuries later, as many of those who laid the city’s foundations had been descendant of the Trojan refugees led by the pious Prince Aineías who fled the destruction, such as Aineías’ descendant Romulus. Today is a day that feasts should be held to commemorate the flight of Aineías and the survival of our ancestors, but simultaneously a day of mourning for those innocent who perished, whether during the Trojan War or any war.

Vestalia, Roman era, Gregorian calendar, June 7th – 15th: Festival specifically in honor of the Goddess of the house, Vesta, and the spirits of the store chambers, cupboards, and the penates.

Vulcanalia, Roman era, Gregorian calendar, August 23: A propitiatory sacrifice during the hot month of August to Hephaistos (Vulcan) in order to protect the home and livelihood from the ravages of fire.  Traditional practices include sacrificing small fish into bonfires so that humans would not be harmed.

Kalends (September), Roman era, Gregorian calendar, September 1: First day of the month. Ceremonies dedicated to Jupiter Tonans (“the Thunderer”) on the Capitolium, and Juno Regina on the Aventine.

Greater Eleusinian Mysteries, Greek era, Gregorian calendar, September 6-12 (Sign of cancer): In honour of Deo and Kore. Called great when the Goddess departs, (At least, the other equinox is in mythology the time of the kidnap of Kore, which is the descent of the souls.)

Apollo Campus Martius, Roman era, Gregorian calendar, September 23: Anniversary of the rededication of the Temple of Apollo in the Campus Martius; Leto is also honored

Feastday of Julian, Later Roman era, Gregorian calendar, November 8: Feast day dedicated to the coronation of Flavius Claudius Iulianus Augustus, the great reformer of Hellenism, as Caesar of the west.

Saturnalia, Roman era, Gregorian calendar, December 17-23rd: Festivals that goes on for numerous days in celebration of the Winter Solstice with a particular focus on the golden age of Saturn.