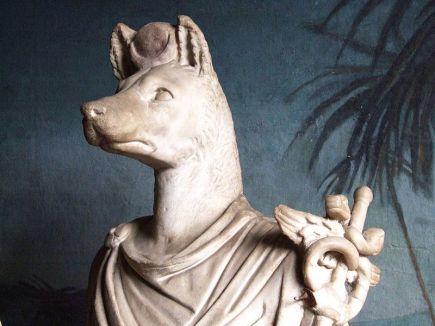 Hermanubis, Patron God of the Egyptian Priesthood and their pursuit of truth.

A Tutelary Deity is a God or Greater Kind who plays the role of patron, guide, guard, or protector of a particular area, geographic feature, people, nation, person, lineage, or occupation. It should be noted that most people have a patron deity in some form or another, whether that be of their place, their home, their profession, or more particularly the divinity that the individual is engaged in a Personal Relation with.

Often Gods and Greater Kinds are patrons over particular locations. They might be patrons of cities, but they could also be patrons over areas of nature, such as trees, lakes, rivers, oceans, mountains and so on.

Tutelaries over cities: In the ancient Graeco-Roman world many cities had their own patron deity or deities (especially prevalent in Greek polis’). These divinities are traditionally recognized as a representative and protector of that city and region; and considering the reciprocal nature of Hellenism, the city is often a representative of the deity as well. A city during the Graeco-Roman era would show distinctive worship and reverence to their patron(s), hosting and dedicating more festivals to their patron(s) that may be uniquely local than they may to other deities. This doesn’t mean the city-states would worship their patron divinities solely; rather they’d merely worship them more pronouncedly. People could still have more personal and devoted relations with other Gods that weren’t the city’s patron, and the citizens of the city didn’t need to have their own personal relations with the city’s patron deity either. Perhaps among the most well-known examples include the city of Athens, named after the Goddess Athene, and even cities outside of Greece such as the holy city of Rome was also a good example of this, with the three principal deities: Zeus (Jupiter), Athene (Minerva), and Hera (Juno). Examples for contemporary cities could perhaps be determined too, an example of such being what James Hillman remarks about New York City: “If there were a God of New York, it would be the Greek’s Hermes, the Roman’s Mercury. He embodies New York qualities: the quick exchange, the fastness of language and style, craftiness, the mixing of people and crossing of borders, and of course, imagination.”

Tutelaries over places of nature: The world is alive and full of many Gods, and because of this parts of the natural landscape such as trees, lakes, rivers, oceans, mountains and more also have tutelary divinities. Tiberinus, a Daimon of the river Tiber, is a good example of this.

Patron of the Home

Each household has protective deities. These include:

These divinities are honored and worshiped at the Lararium, the household shrine.

There are also deities who are patrons that are relevant to particular lines of work or lifestyles, life choices, and even stages of life. In the role of patron of a profession, Gods may be your protector and keep you safe and increase your good fortune and luck in your endeavors, if through piety and sacrifice you engage in a personal relation with them and remain in their divine benevolence.

This form of patronage is not precisely permanent, nor does it require any deep personal relation with the deity – just that particular connection of life choices and stages. Hephaistos may be your patron deity if you’re a smith, but if you changed your profession to that of a Sailor, it’d be Poseidon that is your patron now. Hermes may be your patron if you’re traveling, but once you finish your traveling He won’t be your patron in profession anymore; at least unless you’re a merchant. It is, however, recommended that one develops a close relation to the patron of their profession. Hellenism is based in reciprocal relations between humans and the divine, and building kharis with the divine will bring you closer to their divine light so you may be better guided.

Personal Patrons have to do with the certain individual, rather than an occupation or a place.

Personal Relation: A patron deity may play a protective and guiding role in a specific humans life. The relationship between an individual and their patron deity is usually a deep and personal one, being anything along the lines of a kind master, teacher, parent, guardian or anything of that sort. This form of patron deity is a Personal Relation. It is important to note that you aren’t getting “special access” to the divinity, but instead, you’ve merely moved closer to them than most other people. The light of the Gods is for all, it’s merely a matter of unblinding yourself and moving closer to their benevolent radiance.

Personal Daimon: There also exists the connection one has to their Personal Daimon, the Daimon who is designated to watch over your soul from the moment it was sewn into our material realm. It is there to protect you, warn away danger, guide you, inspire you like a personal muse, and even help you attain good fortune, and as such it is the patron divinity of our spiritual development. Often, it does all of this without you being aware of it. In the divine Plato’s dialogue, the Apology, Socrates states that his own Personal Daimon never instructs him what to do but rather gives him warning when he’s about to err. Therefore, the Personal Daimon maintains the free will of the person it oversees by allowing them to determine their aims and how to pursue them without interference, however, it will provide warning when those goals aren’t spiritually healthy. Of course, if you don’t engage in a personal relation with your Personal Daimon, whether that be through the piety of sacrifice/offerings, libations, hymns or something of that sort, you probably won’t acquire much guidance or assistance from it. Hellenism relies on reciprocal relations between humans and the divine, as only by bringing ourselves closer to the divine through offerings do we unblind ourselves from what binds us to materiality.