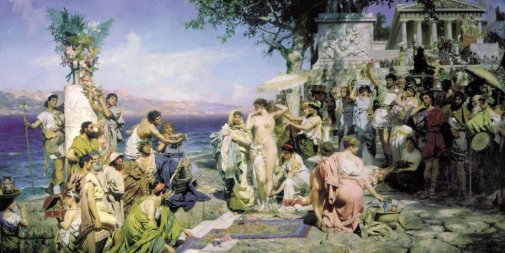 In theourgia, prayers, hymns, and incantations are indistinct. Traditional prayer was fairly formulaic. Hymns were narrative and metrical. Incantations sometimes contained “barbarous words,” which were sometimes actually foreign, and were sometimes strings of vowels that were potentially intended to be sung. These could quickly fluctuate, though, and many accounts show prayer turning into hymns, hymns ending in prayers, and incantations being invoked in the middle of both.

While a prayer done in a much more informal manner can be done occasionally, following the formula allows one to outline the nature of the relation with the deity. For example, one might begin a prayer to a God and find themselves stuck in the justification step with nothing to say. That serves as an indication that more work with the deity is needed before any requests are made.

Iamblichus speaks a great deal on the benefits of prayer. In the De Mysteriis he writes that “extended practice of prayer nurtures our intellect, enlarges very greatly our soul’s receptivity to the Gods, reveals to men the life of the Gods, accustoms their eyes to the brightness of divine light, and gradually brings to perfection the capacity of our facilities for contact with the Gods, until it leads us up to the highest level of consciousness [of which we are capable]… And, in a word, it renders those who employ prayers, if we may express it, the familiar consorts of the Gods” (Iamblichus De Mysteriis, V.26, 277). It is through prayer that an “indissoluble hieratic communion is created with the gods” (Iamblichus, De Mysteriis V.26 275).

Prayer is ultimately an important thing. The goal of prayer isn’t merely communication with a deity, however; it is also the establishment and maintenance of a personal relation with one. Here is a general formula that can be broken down into predictable sections:

Knowing the kind of God you’re approaching is reflective of the attitude and posture one should take for the prayer. For example:

Kneeling isn’t common, but clutching the knees of sacred statues can sometimes occur.

Naming a God is more than just giving a name– it’s important as it defines a relation. To name a God wrongly is to imply the wrong relation and thus prevent communion with the divine. Often, every name or epithet that might be relevant is invoked, often ending with “or with whatever name you wish to be called” (Plato Crat. 400 e) (Plato Phdr. 273 c) (Plato Tim. 28 b) (Plato Phlb. 12 c) (Plato Aesch. Ag. 160). Such a string of names secures knowledge of that God’s names and attributes, and can also produce something of a hypnotic effect. The names are synthemata.

Furthermore, invoking the names of particular sacred areas where a God may dwell or hold significance from, can also be done. Often the location of that God’s most significant or most influential temple. (e.g. The Serapeum of Alexandria for Serapis, or the Temple of Artemis Ephesia for Artemis)

The identification can be followed by a recounting of some relevant myths, which act as symbola.

The justifications offered to the Gods consist of previous acts of piety: “If ever I have made sacrifice, set up an altar, kissed my hand to your image,” etc. This isn’t an attempt to guilt the deity into listening, but rather to remind the theurgist of their piety and the nature of their relation with the divine.

It is encouraged by great people such as Socrates for people to ask more wisely in their prayers, and many later philosophers simply pray for the Good (Socrates in Xen. Mem. 1.3.2) (Plato Euthyphr. 14 d) (Iamblichus De vita Pyth. 145). The divine Julian, in his Hymn to the Mother of the Gods, prayed for all men to be granted knowledge of the Gods and for impiety to be outcasted.

The vow ties to do ut des, “I give so that you may give.” This vow has a spiritual purpose as a promise to the God, and serves to ensure gratitude and also solidify the relation between the worship and the God.

Since a vow is tied to do ut des, the cycle of gift giving, vows are always positive, for example, “I will burn you a bundle of frankincense” or “I will offer you the sacrifice of a goat.” It is positive because you promise a gift, which is necessary for the gifting cycle. A negative vow is something done when one finds themselves in trouble, such as “I swear if I recover I will never eat seafood again!” is seen as improper since it is something that you do for yourself, not for the God; there is no exchange of gifts with a negative.