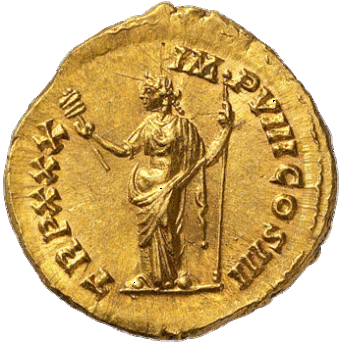 Happiness is the expected attitude and essential element when receiving the presence of the divine. This is because it is understood that the Gods live in an eternal state of perfect bliss and blessedness called makariotes (Latin: beatitudo) by Aristotle (Bodéüs 1992, 117), which is one of the many features that distinguish God from man (in addition to the Gods being immortal, immaculate, perfectly beautiful, all-powerful, etc.). As such, happiness is an important value in Hellenism, especially in the context of our worship of the Gods. In order for humanity’s service of the divine to be complete, it must be completed in a joyful manner. Happiness is thus the most appropriate attitude when engaging in Their worship.

One important way to promote happiness in honor of the Gods was to host great public games and produce great works for the benefit and entertainment of the people. If a private citizen held these, these would be called munera (singular: munus), and if the state held these, they would be called ludi (Bispham 2007, 15, 26). These games were typically in conjunction with, or sometimes as the major feature of, major religious festivals, either as part of an annual holiday or part of a fulfillment of a vow to the Gods. The ludi were thus intimately understood as part of the worship of the Gods. These games could take any number of forms, and a Isidore of Seville classifies there as being four types of ludi (Isidore Etymologiae, XVIII.xvi):

There are times when people who are undergoing private mourning for the recently deceased can be asked to put aside mourning on days of public festivals. Such an example is a decree Emperor Augustus issued on May 25 of 17 BCE while reviving the Ludi Saeculares to celebrate the arrival of a new age, which, in consideration of the importance of the occasion, authorized women who were mourning to cease (Beard 1998, 141 / Edited):

“Since, insofar as it accords with proper custom, and in like manner has been observed in numerous precedents, whenever there has been a rightful cause for public celebration, it has been decided that the mourning of women should be suspended; and since it seems that it is appropriate both to the honour of the Gods and to the remembrance of Their worship that that should apply to the time of solemn rites and games and that it should be scrupulously observed – therefore we have decided that it is incumbent on us to issue to women a decree by edict, that they should suspend mourning.”

Adjusting felicity for contemporary practice, the Julian Hellenic tradition that this page endorses holds that people who are in a period of mourning that feel they can comfortably put it aside to participate in religious festivities should do so; however, if they are truly grieve-stricken by the loss of a loved one, then there is no shame in holding off.

[Olbos refers to a material happiness granted by the Gods. To be filled.]

Eudaimonia is sometimes connected to eutykhia (Latin: bona fortuna), or good fortune/luck. Here, one should avoid words and/or actions that are “of ill omen.” An example of this is from Roman history, where if a national disaster happened, a day of public mourning might be declared, which would also from there forward considered a day of bad luck. As such, there are several days on the Roman calendar on during which the doors of temples are to be closed, and certain activities are to be avoided. Such activities include marriages, offering sacrifices, making business deals, and so on. If someone is to offer a sacrifice on such a day, people who are watching are to keep silent while the officiant recites the prayers, and music is to be played to drown out any “unlucky” words uttered from those passing by.

Aristotle tells us of entelecheia in his Physics. Entelecheia means “having purpose within.” The “tele” portion of this word derives from the Hellenic term telos, which is a thing’s ingrained end or purpose. All things which exist have a telos. For us humans, our telos is eudaimonia (Latin: beata vita), the contented state of having a good indwelling spirit in which we are blessed with a divine happiness marked by health, productivity, and prosperity. We seek eudaimonia because it is our built in telos to do so.

Etymologically, the word eudaimonia is a composite of eu, meaning “good,” and daimon, which can both refer to a class of spirits intermediary between humanity and the Gods, as well as refer to divine entities quite broadly. As such, we can understand that eudaimonia is a divinely-granted happiness or good fortune that the Gods bestow upon humans who have achieved the pax deorum, a state of harmony or peace with the divine world. Unlike how most people think of happiness, eudaimonia is not a feeling. You cannot wake up one day having eudaimonia, and then lose it the following day. Rather, eudaimonia is a bit more detached, and can be better understood as a contented state of peace or faring well, that your Personal Daimon has helped you reach.

In Latin, eudaimonia is also called Felicitas. While Eudaimonia is more individualistic and private, Felicitas is more collectivist and concerned for the public space, denoting “a kind of civic happiness . . . connected to the welfare, prosperity and fertility” (Prusac 2011, 75). Felicitas is depicted as a Goddess and worshiped in Her own right.

Bispham, Edward. From Asculum to Actium: The Municipalization of Italy from the Social War to Augustus. Oxford University Press, 2007.