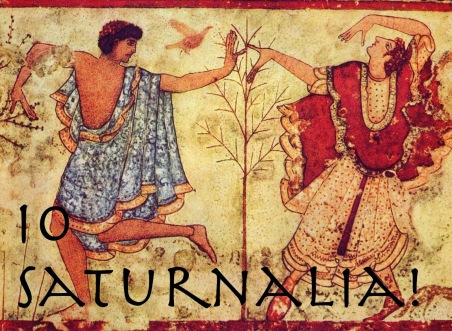 Saturnalia (also called Kronia) is a week-long festival in honor of Kronos (Latin: Saturn), the God of Agriculture, that celebrates liberation and freedom, including the freeing of the soul into immortality. The festival of Saturnalia begins December 17 and lasts until December 23, coinciding when the divine sun enters Capricorn, the traditional astrological house of Saturn.

The Saturnalia is the most popular holiday of the Roman year. Catullus describes it as “the best of days” (Catullus Poems, XIV). The history of Saturnalia began with the dedication of the Temple of Saturn in around 498 BCE, one of the oldest religious sanctuaries to have been built in Rome. The dies natalis (anniversary)  of the dedication of the temple was celebrated on December 17, but became such a popular celebration that it was extended to three days, and then to an entire week during the Imperial period, from December 17 to 23.

It is an occasion for celebration and visits to friends and loved ones. As the name implies, it is dedicated to the deity Kronos, who looks over agricultural bounty and in mythology overlooked a golden age of plenty, when crops grew without human toil, and humanity lived in harmony with nature and one another. As such, Kronos also embodies prosperity and wealth. It is a celebration of liberty, and in the ancient world Saturnalia would be a joyous time for slaves, where they would enjoy much more freedom.

Saturnalia is a time of giftgiving, and the exchange of gifts between loved ones (such as friends and family) is widespread. You can give your loved ones anything, but traditional gifts include:

Since the theme of Saturnalia is liberation, a trend in Saturnalia is disrupting rules and social hierarchies. One could swap roles with other members of their family, perhaps by dressing up as one another. Feasting is also an absolute necessity; eat a delicious dinner and, if at legal age, enjoy good wine. Gatherings of friends and loved ones happen during this time. Parties and gambling tends to also be common, most particularly games played with dice. Very importantly, philanthropy is also practiced, as it is a time of charity. The holiday is a time of merrymaking, so take joy.

One should make an offering (perhaps olive oil) to Kronos on this day. Unlike any other day, one doesn’t need to veil their head when engaging in sacrifice, though it is still recommended.

There are numerous offerings that might be appropriate to Him, both connecting to His role as an agricultural deity, and one that could fit in the context of His mythology:

Most decorations involved the color green- swathes, garlands and wreaths of holly and evergreens being hung over doorways and windows and ornamenting stairs, candles, decorations of stars and sparkly, metallic ornaments, etc – Ornaments in the trees included solar symbolism, stars, and faces of the deity Janus. Trees weren’t brought indoors, but rather decorated where they grew.

The phrase “Io Saturnalia!” is a characteristic salutation of the festival, originally commencing after the public banquet on the single day of 17 December. It is a festive greeting, traditionally spoken during the season. The interjection io (Greek ἰώ, ǐō) is pronounced either with two syllables (a short i and a long o) or as a single syllable (with the i becoming the Latin consonantal j and pronounced yō).

Opalia takes place on December 19 and can be considered part of Saturnalia. It is dedicated to Rhea (Ops in Latin), Goddess of Earth & fertility. It celebrates the bounty contained in Roman grannaries, and feasts happen on this day.