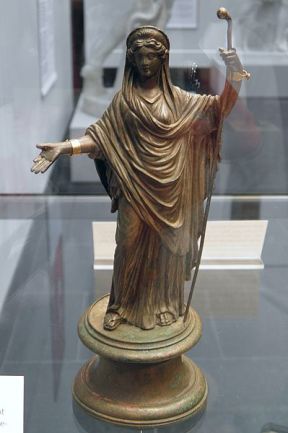 Both Janus and Hera (Juno) are invoked at the beginning of each month, and many Kalends honor a particular aspect (numen) of Hera. On each Kalends, a sacrifice is traditionally held. Historically this would be on the Capitol in the curia calabra and in the Forum in the regia. On this day, She is honored as Iuno Regina, who is tied to the realms of war, motherhood and royalty.

Livy writes an account of the evocatio, a ritual that invites the deity of a rival to abandon Her own people and join the other side, of Juno (or Uni, the Etruscan understanding of Juno) of Veii:

“A huge crowd set out and filled the camp. After taking the auspices, the dictator went out and ordered the soldiers to take up their arms. ‘It is under your leadership,’ he [Camillus] said, ‘Pythian Apollo, and inspired by your divine will, that I am advancing to destroy the city of Veii. To you I owe a tenth part of the spoils. To you, Queen Juno, who now dwell in Veii, I pray that you will accompany us in our victory to our city, soon to be your city, where a temple worthy of your greatness will receive you.’

“[After the battle], [a]fter ritually cleansing their bodies, they [young soldiers] put on white robes and were entrusted with the task of carrying Queen Juno to Rome. With reverence they entered her temple, at first they scrupled (religiose) to lay hands on the image because it was one that, according to Etruscan practice, only a priest of a certain family was accustomed to touch.”

The statue consented to being moved to Rome by communicating; which was done either by speaking or nodding. This story thus implies that Juno Regina wasn’t native to the city of Rome.

At least two temples in were dedicated to Her in the sacred city of Rome – one on the Aventine Hill (dedicated 392 BCE), and later one near the Circus Flaminius (dedicated 179 BCE). A difference exists in the way temples were constructed to Juno Regina, as noted by Weigdel; Juno Regina of the Capitoline Hill is given a place in Rome’s greatest temple, and Her as well as “Minerva (Athene) received secondary and subservient positions in lateral cellae flanking Jupiter’s, and the temple is known by His name.” Meanwhile the later temple is completely independent, and was located outside the pomerium. 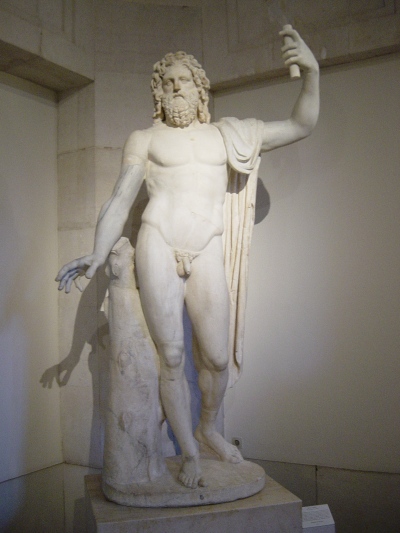 “Jupiter … through whom we live the span of our lives, in whose control are all men’s hopes of life, grant that this day may be free from harm.” -Plautus, Little Carthaginian 1187-8.

While all Kalends are sacred to Juno, the Ides are sacred to Jupiter (Zeus); however, on this Kalends, He is also worshiped, as Iuppiter Tonans – Jupiter the Thunderer. This epithet, or aspect, of Jupiter, is the one most familiar ideas of this deity, where He would use thunderbolts as tools of divine judgment.

The history of the temple’s construction goes back to the reign of Emperor Augustus, who vowed a temple to this aspect of Jupiter when he barely missed being struck by lightning during one of his campaigns in Hispania during 26 BCE. Four years following this event, the temple was finished construction and dedicated on September 1, 22 BCE, on the Capitoline Hill. This temple was allegedly so successful that Augustus was visited by the divine God in a dream, who complained that His new temple was more popular than His proper great temple to Iuppiter Capitolinus. In response, Augustus had bells hung from the Tonans temple to represent that it was merely a doorway to the main proper Capitolinus temple.

Ancient Roman engineer and architect Vitruvius noted in his work De Architectura that temples to Iuppiter Tonans must be open to the sky:

“Propriety is that perfection of style which comes when a work is authoritatively constructed on approved principles. It arises from prescription, from usage, or from nature. From prescription, in the case of hypaetheral edifices, open to the sky, in honor of Jupiter Lightning [Tonans], the Heaven, the Sun, or the Moon: for these are gods whose semblances and manifestation we behold before our very eyes in the sky when it is cloudless and bright. The temples of Minerva, Mars, and Hercules will be Doric, since the virile strength of these gods makes daintiness entirely inappropriate to their houses. In temples to Venus, Flora, Proserpina, Spring-Water, and the Nymphs, the Corinthian order will be found to have peculiar significance, because these are delicate divinities and so its rather slender outlines, its flowers, leaves, and ornamental volutes will lend propriety where it is due.”