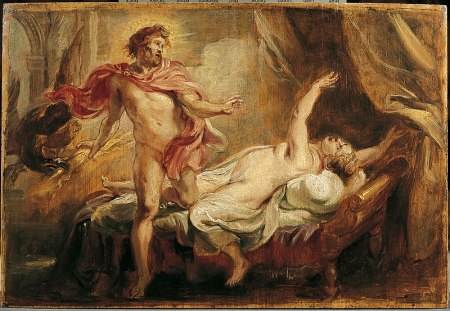 Theophany (Greek: theophaneia) is the explicit “appearance, arrival or felt presence of a deity” (Luck 2006, 508), where a God may manifest and communicate with one or many individuals in some manner. Such appearances of the divine have been reported over the centuries and They have taken on a wide variety of forms, and it is possible to receive such an experience through prayer, invocation, and so forth. The divine Emperor Julian experienced a theophany on the spring of 363 ACE when taking the route to Mount Kasios to bear witness to the early dawn and give worship and provide a sacrifice to Zeus. The sun rose, and in broad daylight, Julian received an epiphanic vision from Zeus, and “saw the God and after seeing him… received advice” (Libanius, Or.18.172). It is here that Zeus, “[as] one of the immortals descended from heaven, took [Julian] by the hair, spoke to him, and after listening to [Zeus’] answer [Julian] departed” (Libanius, Or.18.172).

It is important to note that experiencing a theophany isn’t seeing the unbridled essence (ousia) of the Gods. The Gods’ ousia are in every way beyond us, laying in the Intelligible Realm, and as such an appearance of Their full form is far beyond what any mortal could handle, exemplified when Semele bears witness to the full form of King Zeus and is incinerated by the flames of His power. Neither are these forms constructed by the “psychic power” of the medium, nor are they generated out of matter “taken from (existing) organisms,” like the medium’s body or the bodies of sacrificed animals (Dodds 1973, 205), as a lower being cannot generate a higher one (Iamblichus De Mysteriis, III.22). In truth, as the eternal essence of the Gods lays beyond us at the summit of existence, Their bodies within our mundane cosmos are completely ruled from the outside, as opposed to us where our bodies are ruled by souls which lie within. The flesh of these bodies is a completely exotic substance that is immortal, usually invisible to us, and nourished by divine substances like ambrosia. The divine Proclus tells us a great deal of theopathy (Proclus In Republic, 1.39.1ff), detailing that the “materialization” of immaterial divine beings is not the God themselves, but rather an emanation from them which is “partly mortal, partly divine” (Luck 2006, 215), and even this we do not see with our physical eyes but rather with the eyes of our soul (Dodds 1973, 205) in accordance to the principle “like is perceived by like” (Luck 2006, 215).

Dodds, E. R. The Ancient Concept of Progress and Other Essays on Greek Literature and
Belief. Oxford, 1973.