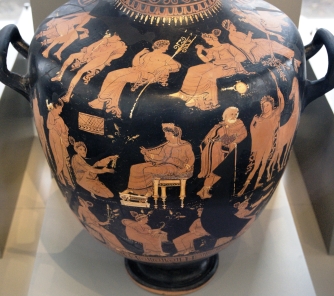 The English word “mystery” is derived from the Greek word “musterion” (plural: musteria). The closest word in English would be “sacraments,” though they’re not equivalent. The word sacrament is derived from the Latin word sacramentum, a sign and what is seen. Mustērion, in contrast, refers to something hidden and stresses the power of the Good as made manifest in an unseen way through their holy rites.

A mystery is a sacred rite that has hidden within it the power and providence of the One. These rites are both mysterious and hieratic, containing the sacred and hidden powers of the unseen world. Tradition holds that hieratic (proper) rites were originally instituted by Julian the Chaldean and his son, Julian the Theurgist. As theurgic rites, however, they have their origins in the One, the Celestial Demiurge, and the divine intelligibles. They were fully brought into by the divine Iamblichus, who himself first applied the term “hieratic” to theurgic rites. It is a two-fold allusion:

Initiates into Mysteries don’t have a sense that non-initiates are following a “false” religion, even though they themselves were in possession of some higher truths. There are many paths to the divine truth.

All Mysteries tended to be incredibly varied, but most held certain traits in common:

They also, by large, never let most of their information leak. However, we can gather some rather broad information on how they function.

Firstly, one must be in a proper spiritual state to both give and receive a mystery if there are any hopes of the intelligible rites having success. Both the giver of the mystery and the receiver of a mystery must commit to several spiritual preparations, such as contemplation, purification and potentially some sacred rites. If a mystery is received in an unprepared state, at best, nothing happens. At worst, however, the mystery may have the opposite of its intended result; moving the soul farther away from the Good instead of closer via antipathy.

By large the efficiency of a mystery would depend on the person administering it. The administer of a mystery isn’t merely a conduit for divine power, but rather a participant in that power. Without proper participation, a mystery can only be performed in its outer form with an absent inner power.

If performed by a fully purified and illuminated soul a mystery will always produce the desired result. However, since these souls being few are far between, it’s possible for mysteries to fail depending on the state of the soul performing it and the capacity of the soul receiving it. If both souls are in a properly prepared state, a mystery will always be successful, to varying degrees, depending on the differing states of those involved.