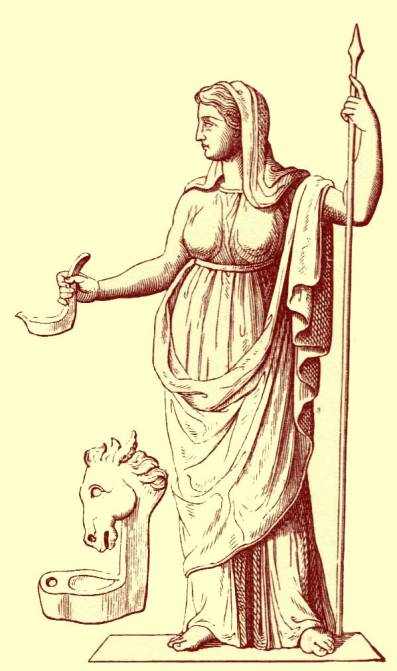 “Zeus the Father gave Her [Hestia] a high honor instead of marriage, and She has Her place in the midst of the house and has the richest portion.”
-Hom. Hymn to Aphrodite 29-32

Hestia (Vesta in Latin) is the virgin Goddess of the hearth – the fire essential for daily life, home, and the preservation of Roman identity. As the Goddess of the family hearth, She presides over the cooking of bread and the preparation of the family meal. She is also Goddess of the sacrificial flame and, like Janus, is a gateway deity who receives a share of every sacrifice to the Gods. The cooking of the communal feast of sacrificial meat is, naturally, a part of Her domain. Paradoxically, though a virgin Goddess, She had a certain procreative power.

As Goddess of the flame, sacrifices which are burned go to Her. Zeus is said to have granted Her “the richest portion” of the animal sacrifices made by mortals to the divine, which is why animal fat is given to the Gods – to keep the hearth aflame.

Hestia role as protector of the Roman State was completed through the preservation of an eternal flame, which burned day and night in Her temple located in the Forum Romanum (which was unusually round), which was maintained by the Vestal Virgins, six young women from Rome’s elite noble families whose chastity was sacrosanct (failure to remain chaste for the required 30 years of service was burial alive). The flame represented two things:

As a gateway deity, She receives a portion of every offering. She is often given offering in household worship, represented by a flame, which is often either a candle or a lamp. The maintenance of a fireplace is another act of devotion to Her.

She is also worshiped on Noumenia, the 1st day of every lunar month.

Greenfield, Peta. “Who were the Vestal Virgins, and what was their job? – Peta Greenfield.” Lessons Worth Sharing | TED-Ed. May 30, 2017. Accessed September 26, 2017. https://ed.ted.com/lessons/who-were-the-vestal-virgins-and-what-was-their-job-peta-greenfield.