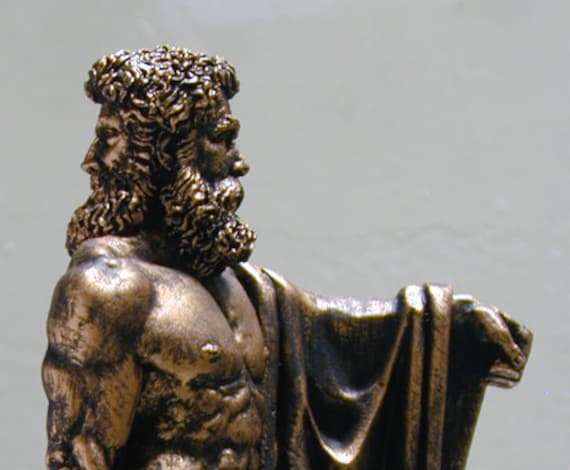 Ianos (Latin: Ianus) is a God of beginnings and ends; and with that duality, which was sprung when Zeus the Demiurge’s Word (Logoi) of creation was spoken. His association with beginnings and ends goes further, as He also presides over every entry and exit, as well as doors and gateways, making His a protective power over a city or building which He watches. He is also a God of conflict and resolution; as well as births and transitions. His importance to the process of peace and war is signified by His sacred building (often misattributed as a temple, but really a building with two gates), which opened its door during times of war and closed them in times of peace. He is the gatekeeper of Olympus, and as the sentry, He permits the prayers of mortals to enter and be received by the Gods. It is, for this reason, why He is invoked at the beginning and end of all prayers and sacred rituals.

When taken literally, as some such as Cicero have done, Ianos is consequently one of the most important Gods of the Greco-Roman pantheon, as no venture is without a beginning, no age is without renewal, no journey without a first step, and no deity supplicated without passing through Him. Even the morning, belongs to the Matutine Pater, who symbolically unlocks the gates of dawn to start the day.

Ianos is unique among the Gods that cultivated in the region of Rome in that His presence is not recorded by other cultures of the same time, but maintains an important presence that can not be understated, commanding the access to the Gods and presiding over the ebb and flow of time that we rely on.

Ianos’ iconography reflects his tied nature to duality, being commonly depicted as a God who bears two faces. He is also associated with keys and staffs. It is said that he serves as the namesake for the month January, the first month of the year which is sacred to Him, though ancient sources also claim Juno, or Hera, is the basis of it. The two-faced nature of Ianos also places Him as a protector of civilization, as He is seen as the source of humans turning from a life of savage behavior into one of political and civil society.

Ianos also frequently bears the epithet Pater, father, a significant title showing His role in the protection of humans and Guardian of the year and ordered life, which is further shown by one of His statues gesturing in a manner showing the number of days in a year. He is not the direct Father of the Gods, but is the gatekeeper to Their attentions and thus, acts as a father figure to all of us.

With all the association of beginnings and ends, and thus duality, Ianos can be understood as one of the primary gateway deities alongside Hestia. He is a deity that is to be invoked at the beginning and end of every ritual, no matter who the ritual is dedicated to.

As a God of beginnings, He is to be invoked at:

It is common that sweet things are offered to Ianos, but rudimentary and less complex sacrifices are also customary. As Ianos is a source of life, civilization, and beginnings, the usual Roman sacrifices of spelt, salt, honey, figs, as symbols of these gifts can be offered.