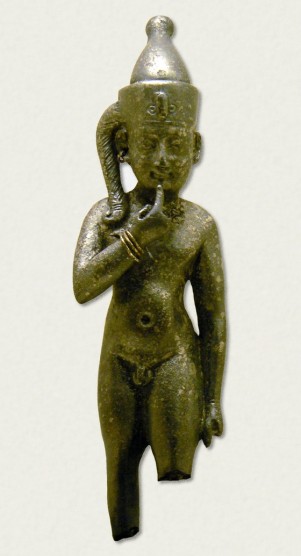 Harpocrates is the God of secrecy, mystery, and silence. Harpocrates is the child of Isis and Serapis, who together form the Alexandrian Triad. He is said to personify the newborn sun each day, the first strength of the winter sun, and the image of early vegetation.

Harpocrates is the Hellenic interpretation of Harpa-Khruti (Horus the Child), who is commonly depicted as a younger boy with a finger on His chin held just below His lips. This has a dual symbolization; in Egypt, this symbolizes childhood and the hieroglyph for His name, but in Greece, the gesture is understood as a hush for silence, and as such, He became a favorite deity with the later mystic schools of philosophy.

The cult of Harpocrates, as it is known from Alexandria, Memphis, Hermopolis Magna and other cities, likely originated in the rites performed in the mammisi, or “birth-houses”, which were parts of temple complexes where Horus would commonly be worshiped. It is here that the union of the parent deities (Serapis and Isis), the birth of the child-God and His raising by the mother were celebrated.

The God is also venerated privately, with images placed in larariums or altars at home.

Horus is said to carry on a war against the powers of darkness, and hence the ancient historian Herodotus seems to consider Harpocrates to be the same God as Apollo. This may be especially true as both Gods have strong associations with the sun and oracles.

Kennedy, Maev. “Relic of Harpocrates, the god of secrecy and silence, found at Silchester.” The Guardian. July 16, 2010. Accessed September 26, 2017. https://www.theguardian.com/science/2010/jul/16/egyptian-god-relic-identified-silchester.