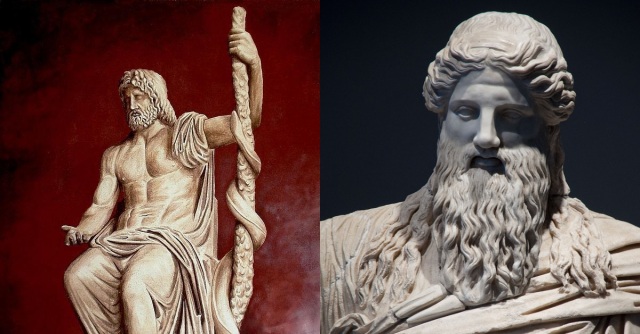 Asklepios and Dionysos, faces of the Sub-Lunar Demiurge.

Asklepios and His brother Dionysos are expressions of the Sub-Lunar Demiurge, the Demiurge whose activity focuses on the Sub-Lunar Level, literally the realm “Below the Moon”, or alternatively “Below the Heavens,” which means the material cosmos below the sphere of the moon, i.e., our world. The Sub-Lunar Realm is part of the Encosmic Realm, being the realm that we live in, and Iamblichus splits the Sub-Lunar Realm into three; the aether, ruled by Kronos, the air, ruled by Rhea, and the sea or water ruled by Phorcys. It is the Sub-Lunar Demiurge’s roles to direct the Sub-Lunar Realm and all within it, including human souls who fall into it and Daimons whose job is to lead them upwards again. They separate and re-assemble the logoi (manifestation of the Forms shaped and directed by the Celestial Demiurge) in the Realm of Generation, organizing them to give shape to the hulic matter of the cosmos. Dionysos represents the Sub-Lunar Demiurgic power of separation or division. As He is torn asunder by the Titans themselves, Dionysos is the activity of dividing wholes into their constituent parts, separating the logoi from the bodies within which they are contained. Asklepios, however, is a God of healing, and the ill go to His sanctuaries to receive healing dreams. Whereas Dionysos takes things apart, Asklepios restores them, putting the logoi appropriate to us in their proper order.

The Sub-Lunar Demiurge is an imitator, not a creator. They are called “image-maker,” eidolopoios, and “purifier of souls,” kathartis psychon. As souls descend into generation, Dionysos removes from them logoi inappropriate to their nature, and Asklepios attempts to give those souls a life appropriate to the logoi properly belonging to them. In doing so the Sub-Lunar Demiurge also deeply binds the soul into the Realm of Generation. They are the Master Daimons, megistos daimon, especially over personal Daimons.

Expressions of the Sub-Lunar Demiurge

Asklepios is the saviour of the whole world, operating on a lower level than His father the Celestial Demiurge, Helios. Asklepios is “contained” within Helios, however existing on a lower level. He is motherless, and even before the beginning of the world Asklepios was at Helios’ side. The Celestial Demiurge engendered Asklepios from Himself among in Intelligible Realm, and through the light of His visible counterpart the Material Sun revealed Asklepios to the Earth. Asklepios, having made His visitation to earth from the sky, appeared at Epidaurus singly, in the shape of a man; but afterwards He multiplied Himself, and by His visitations stretched out over the whole earth His saving right hand. He came to Pergamon, to Ionia, to Tarentum afterwards; and later He came to Rome. And He travelled to Cos and from there to Aegae. Next He is present everywhere on land and sea. He visits no one separately, and yet He raises up souls that are sinful and bodies that are sick.

Asklepios heals our bodies, and along with Apollo and Hermes aids the Muses in training our souls. The art of healing is derived from Asklepios, whose oracles are found everywhere on earth, the God granting to us a share in them perpetually. When people are sick, it is Asklepios who cures by prescribing remedies and healing dreams. Asklepios does not heal mankind in the hope of repayment, but rather in an act of selflessness, to fulfill His own function of beneficence to mankind.

Dionysos, also known as Bacchus, was born out of divine manifestation, His birth independent of the generation of this world; His soul divine, un-defiled and pure, having emanated from the Creator, King Helios.

Semele, the daughter of the Phoenician King Cadmus, founder of Thebes, was a prophetess of Dionysos, first among the Greeks to perceive the forthcoming Dionysos. However, she was impatient, and gave signal of the mystic rituals connected with the worship of Dionysos early. Because she had not waited for the appointed time, she was consumed by a fire of a thunderbolt that fell upon her. She was called the “Mother of Dionysos”, because it was she who predicted the forthcoming of Dionysos, and it was also Dionysos who honoured her as having been the first prophetess of His coming.

When it was the will of Helios to bestow on all mankind the pass from the nomadic to a more civilized mode of life, Dionysos came from India and revealed Himself as a very God made visible before man. He visited cities of men and leading Him was a great host of divine beings, such as Satyrs, Bacchanals, and Pans, inspiring the mind of man with the Bacchic frenzy of His true knowledge of the Gods. He bestowed upon mankind His manifestation of the plant, the “gentle vine”, a name given to it by the Greeks for the vine’s ability to make their lives gentler.

Dionysos is known for having performed numerous miracles and facing several challenges, such as turning pirates who kidnapped Him into dolphins, but most notable was His conflict with a mortal who opposed Him, Pentheus, the then-current King of Thebes, who denied the Bacchic frenzy of truth that Dionysos brought forth and tried to make the worship of Dionysos illegal once the God came forth and revealed Himself. Numerous times were Dionysos and His followers captured and jailed, but each times their chains would fall off and prison doors open by themselves. Eventually, the many failed attempts at persecuting the God and His followers led Pentheus to be driven to insanity through his denial of the truth of the Gods that Dionysos delivered, causing him to run into the woods to try and deal with Dionysos himself. As he charged with the intents to harm Dionysos, he found himself mobbed by the very people he was oppressing, Dionysos’ followers, who in their frenzy killed Pentheus.