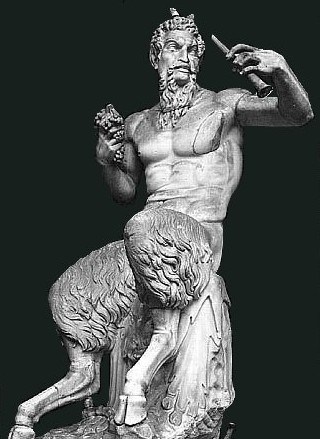 Pan, also known as Faunus, is a rustic deity, associated with ruralness, fields, woodlands, plains, shephards, flocks, and wilds. He is a complex entity, and although most frequent in rural areas, He is not unknown to the walls of urban sprawls, though He is most prevalent in the Arcadian region of Greece, where His presence was first known. Primarily a God of the liminal places and forestry, He is most often concerned with issues such as hunting, music and dance; however since He is also a God of groves and wooded glens, His worship is connected to fertility, copulation, and the spring season.  He is also a deity of healing, and His shrines would be places to invoke incubatio. His worship is related to that of Silvanus.

Be aware, however, that one of Pan’s attributes is the bestowing of madness (The word “panic” literally derives from His name). In mythology Pan frightened the Titans on an attack on Olympus, and during the Battle of Marathon (490 BCE) it is said that Pan favoured the Athenians and so inspired panic in the hearts of the Persian invaders.

Pan is typically depicted as a horned God in the fashion of a Satyr; beings who are half-man, half-goat, who are heavily associated with the worship of Dionysos. They are said to roam the wilderness.

Things that He is associated with are goats, sheep, ram, milk, honey, orchis root, civet and thistle.

Spending time in the wild or in liminal – “in between” – places, doing activities like dancing or singing. One could also offer Him libations and prayers, which Socrates is known to have done.

He had numerous festivals dedicated to Him, such as: